First off let me say that this is not a review so much as it a nostalgic look at one of my favorite games.

Final Fantasy 7 is in my opinion, one of the greatest games of all time. FF7 was the first game in the series that I had played. I instantly fell in love with it and could not put it down. Since the announcement of the Final Fantasy 7 remake, I like most others have anxiously been awaiting a release date. I recently decided to go back and play through the game in its entirety once again while we all wait for the remake.

Characters:
One of the main reasons why FF7 is so memorable is it’s cast of characters who are all unique in there own way. Each character definitely has their own personality and certain little nuances that make FF7 that much more memorable. I always enjoyed the way they all interact in certain situations and how the dialog is different depending on who’s in your party at the time. I understand that by today’s standards that’s the norm but back then it was still relatively a new concept. (At least for me it was) Below I have listed the major players in the game. (I know there are others I could include on this list but the title does say a Quick Look)

There are many other secondary characters in the game as well that add to the main plotline, such as Zack, but for now and for the sake of this blog we’ll leave it at that. (Maybe one day I’ll do character spotlight blog)

When I first played FF7 I was completely taken aback by the scope and depth of the story. It is a story that will definitely take you on a ride filled with many ups and downs. With Cloud as the main protagonist, the journey begins in the city of Midgar. Cloud along with Barret and other members of the group called Avalanche are on a mission to destroy a Mako reactor. During another attack on a different reactor, everything goes wrong and Cloud is separated from the group. This is where we meet Aerith and the story begins to really unfold into something much larger. It goes from a simple group of terrorists trying to stop the evil Shinra corp from using up all the planets energy. To our heroes trying to save the planet from Sephiroth. As the story progresses we learn more about Clouds past as we piece together his memory and we learn more about Aerith and her heritage and connection to the planet itself. 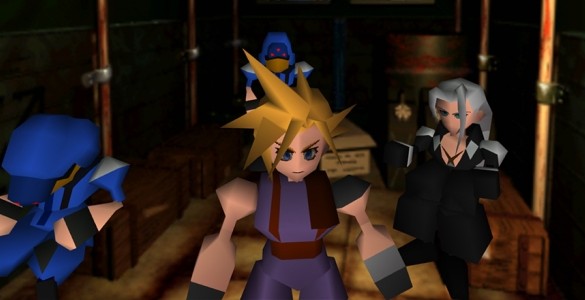 Yes, I know by today’s standards the graphics are outdated. And yes we are looking forward to the remake so we can all play it on our 4k TVs. But as far as I’m concerned I think the game still looks great. The polygonal characters and the way the show emotion is kinda comical. FF7 was also one of the first games to have Hi-Def cutscenes. Again by today’s standards, they kinda resemble claymation from the 80s. Where the graphics really do shine is during the fight scenes, especially when you cast magic spells or summons. The character models look more realistic as well.

Final Fantasy 7 gameplay is similar to that of its predecessors. There are three distinct areas of play which are the world map, the field, and the battle screen. The world map like all Final Fantasy games is huge with multiple areas to explore and lots of random encounters. At first when you finally leave Midgar and get to the world map your only mode of transportation is by walking. You eventually get other means of transport such as a Chocobo, a buggy, an airship, and even a submarine. All of which help you traverse certain landscapes. You ultimately want to get and raise/breed your own Gold Chocobo. The field mode is basically when you are in city/village or out exploring mines and caves you came across in the world map. Here is where you can interact with other characters and progress the story. The battle screen is where yep you guessed it, the battles take place.

I know I left a lot out of this and I’ll most likely add to it over time but for now, I think I am gonna leave this here as is.

You can purchase a copy of Final Fantasy 7 here